Roundtrip to Bermuda and back. 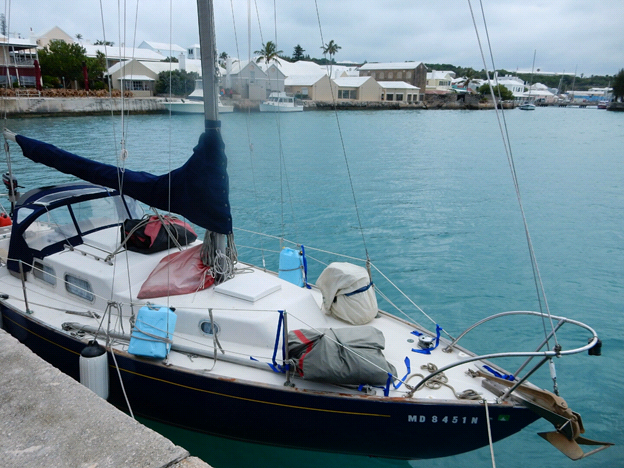 As has been mentioned in this newsletter before, Cookin took off for Bermuda this June. The trip out was a honeymoon cruise; although that metaphor is marred somewhat by the fact that David Cooper (Cookin’s owner) and Kendall Fitrell (Danelly) were the crew. The Coopers, the Fitrells and the Adams’ (Laughing Gull) families all spent a great week on the island. On Saturday David and Jonathan Adams started the trip back to the States – which is where this story really starts.

David and I left on a Saturday afternoon after having a beer or two at the local pub – the White Horse. We checked out of customs, and off we went. We probably got sailing around 1:30, and by dinner time we were out of sight of land. The log shows that at 4:20 the wind vane was set for the first time, and we cracked a beer. We were rolling along on a broad reach with a #1 jib, and two reefs in the main. This sail configuration kept the steering vane happy.

I had gone down to sleep, and was wallowing in the luxury that is the Cookin sleeping arrangement. The Coopers have simply said, in order to be comfortable you need lots of small cushions – maybe 10 of them. Since there were only two of us, the cushions and the sleeper were always on the lee side of the boat. One simply piled the cushions and fell backwards into them – instant sleep. I was awoken around 1:00 with the crack of canvas, the surging of the boat and David’s shout “Jonathan! I was afraid this was happening”. The wind had piped up to somewhere north of 20 knots, and it was time to get that #1 down. David took that task, and it was the last sail change we did under duress for the whole trip. In the middle of the ocean it takes time to change headsails – especially when there are no stars or moon. The boat is bouncing around, and even though you have a harness on, every time the bow takes a plunge into the inky water you make sure that at least one hand is on the boat. We ended up double reefed with a working jib with the wind forward of the beam, but not uncomfortably so. I am not sure what the wind was, but it was in that howlie range where the wind is making that spookie noise in the rigging – somewhere north of 25 knots. The boat was happy as a pig in mud. I was tucked in behind the dodger and I was having fun. It was pitch black. The clouds that came with the weather blocked out all the natural light, which normally at sea is bright. All of this is interesting. However, what is really interesting was that the weather we were experiencing was hurricane Arthur heading south!

By 4:45am, the front had blown itself out, and the boat was flopping around and going nowhere – dead in the water, and pitch black – very eerie. We started the motor and headed West. This was the beginning of a week of gorgeous weather. Monday brought winds in the 10 – 15 range from the beam or aft. We flew the 170 with or without the main. When we had the main down, we spent much of that time with the genoa poled out by the main boom. The boat kept up her five knot average with this configuration. The day started with a whale sighting – right next to the boat! It was a small whale – about as long as the boat, but it had the big square head, and as we went by it rolled on its side, and waved at me. I was sitting on the lazerette hatch having a cup of coffee and was speechless which resulted in odd grunts to try and let David know that he needed to see this. I think because we were making no noise we had snuck up on the whale, and it had made a turn to see us. The rolling on its side was to get an eyeball on us.

By Monday evening, we were aware of the fact that Arthur was shaping up to be a tropical depression and heading north. However, while the report showed that Arthur was going to be at the Bay on Friday night, forecast winds were for 35 knots with the storm 110 miles south of the Bay by Thursday night. Very manageable - At five knots we were on target to be there by Thursday night, and we had almost 300 miles of diesel in the tanks – no worries.

On Tuesday at 11:00, Arthur was still in the Bahamas with maximum sustained winds of 35 knots and heading NW at 2 knots – surely this thing would do what all sensible hurricanes do and give the Florida Everglades a dousing! However, by 2:00pm, our conversations with our support crew Lynne Adams and Kendall  indicated that it was coming north, and all indications were that Arthur would pick up steam - damn! We ran the numbers and came to the conclusion that moving at 5 knots, we would have to be about 300 miles off the US to run if the hurricane deviated from its course and headed for Bermuda – even though Arthur was still off Florida. The forecast was for it to move quickly up the coast – we move at 5 – Arthur moves at 20 (ish). We decided to heave to and wait for the evening forecast and confirmation of Arthur’s severity. Up to this point, forecasts were calling for a tropical depression and wind – but had not actually called it a hurricane (Fox News was but then…). Kendall’s comment was head south west for a few hundred miles and then hook in behind it; perhaps putting in at Charleston or some point south. We had plenty of water, and the food would have all been canned, but we could do that. At 2:00 we decided to stop and hove to with a working jib and a storm trysail. The GPS shows a large figure of eight carved in the water – we barely moved. The weather was perfect and flatter than the Bay – although with swells. We stayed hove to from 2:00 to 11:00 that night, and read or slept. It was rather strange to be in the middle of nowhere reading a book – just as if we were at anchor!

At 10:30 that evening Lynne called. It was now a full blown category 1 hurricane with forecasts for category 2. Lynne had been speaking with our neighbor, Sam a Commander in the Coast Guard, and he had worked through various web sites – turn back was his recommendation. Prior to going Sam had recommended a satellite phone. If you have a phone and an EPIRB and are less than 300 miles from the coast we can get you he said. His comment now, was even if you dodge and head southwest for 100 to 200 miles, that still puts you four days out and these waters will not calm down immediately. You will be making landfall after 10 days at sea in a small boat. “People make mistakes when they are tired – we pick them up all the time!” So when Lynne called she was very worried and stressed – which stressed me out. By this time the updated track forecast had been published and was provided by Lynne. We had the passage chart that included the whole area from the Bahamas to about the latitude of about New York City, and plotted the latest positions out; not good. Just a small shift by Arthur to the east, and we would be closer than we wanted. That was it. Dave’s comment was that if we get caught in a real hurricane we are dead was perhaps a bit of a stretch (I hope! It certainly would have been very uncomfortable.) but if that is your starting point the decision is simple. We turned back for Bermuda. From 11:00pm to 12:00 we got the boat heading East – it takes longer at sea for some reason to do things. I have to say, once we had made a decision, it was a relief. A huge disappointment, but a relief; I had really been looking forward to coming into the Bay from the Sea.

From Wednesday to Friday we sailed and motored. We had plenty of fuel, and had been logging all the engine hours to keep track of our consumption. The only incident of note was our attempt to communicate with a passing vessel. It was 4:00am (ish), and Dave had just come on watch. As I was settling into my cushions, Dave poked his head down the companionway, and asked whether or not I had seen the ship some distance off the port bow – heading north? I poked my head up and sure enough there was a red light of what would be a ship heading north or northwest. It was that time in the morning when dawn is trying to infuse the darkness with light and there was a slight mistiness on the horizon. The red light looked dim enough to be far away, but was certainly up on the horizon – so closer that one would have thought it could get before we saw it. Dave picked up the VHF, and called the vessel. We were always hopeful that a ship would respond and provide a weather forecast. We tried a number of times with no response. Over the course of this exercise, the sky brightened a little more. Something was wrong. The light was too high to be on a ship that we could not see. It slowly dawned on us that we were attempting to contact a star for a weather forecast! Good thing there was no response! I had seen the same star on the way out, and at first thought it was a plane, and then, because it was not moving, a helicopter as we were still theoretically close enough to Bermuda. I cannot recall if I ever reached the conclusion that it was a star. Regardless we had a good chuckle, and I headed down to my pile of cushions.

We made landfall at 12:15 on Friday, and motored all the way around the reef into St George to clear customs before they closed for the weekend. We made it by about 4:00 with 2 – 3 gallons of fuel left. We had seen a whale, a large pod of dolphin with the tiniest newborn I have ever seen, and we actually saw a green flash as the sun went down! Well, maybe not a flash, but definitely a green sizzle, and after years of seeking out the flash, that was the first time for me.

We got a mooring about 200 feet from the White Horse, with its large screen TV and World Cup Soccer and beer, and right next to the café about 30 feet off the starboard quarter. Coffee and beer in close proximity; Friday night in St George; no family! What were two guys to do? That is in the next installment. The weekend and our exit from Bermuda actually provide a more interesting read than the above. However, this sets the stage for the next article: Phoopah, Eddie and Dingbat, Oh my! 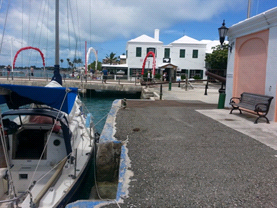 Cookin on the wharf with the White Horse Pub ahead. 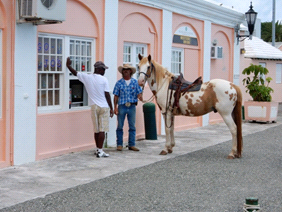 “Cowboy” Tony from South Carolina and his steed at the coffee shop window. Taken from the deck of Cookin. 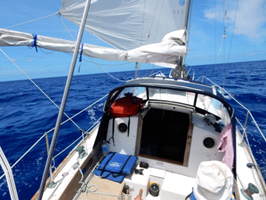 Rolling downwind right around the time we saw the whale; wind about 10kts. 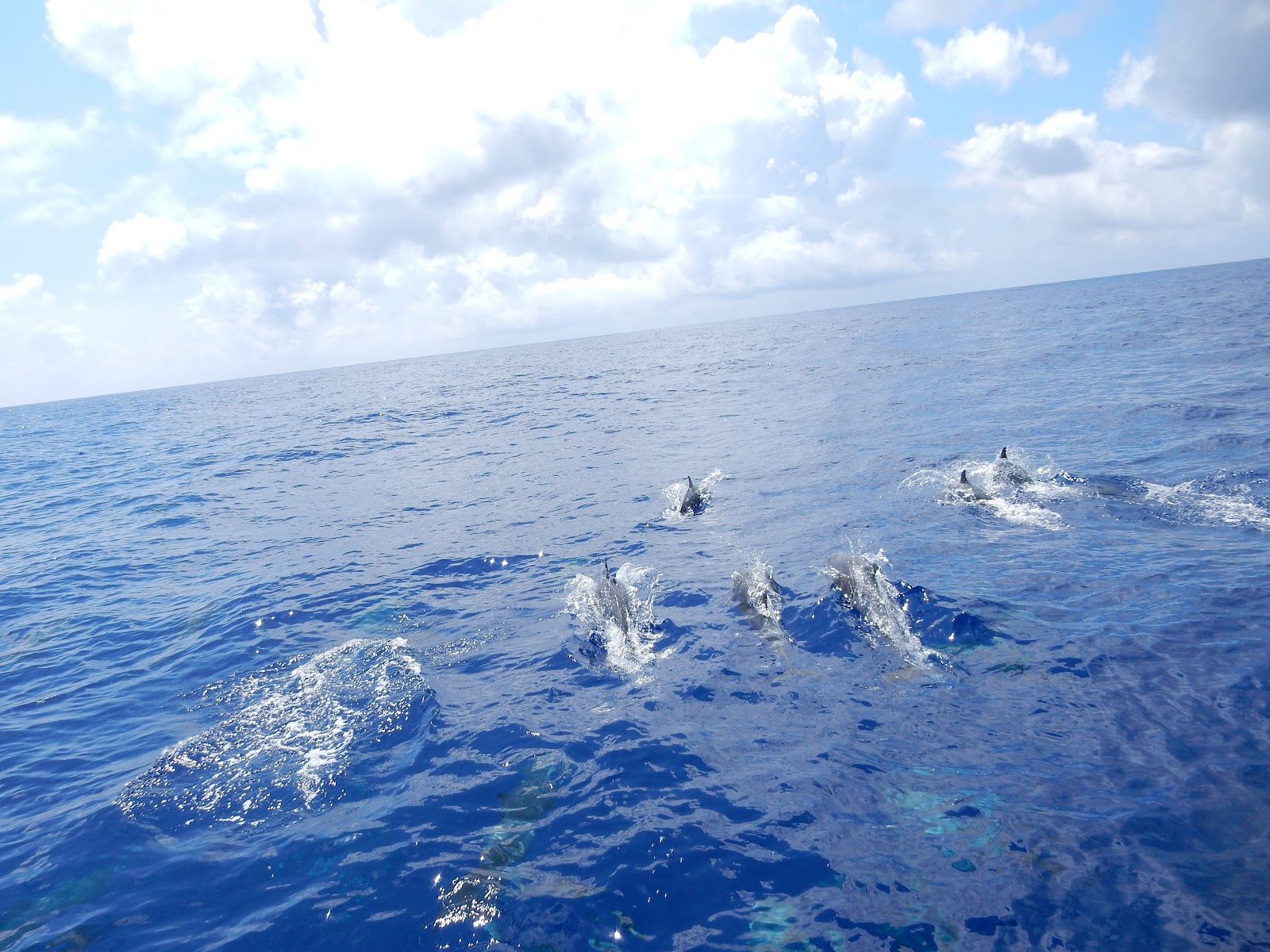 Large pod of dolphins. There were about 20 dolphins in this pod; including the tiniest infant dolphin I have ever seen. It was probably about three feet long. 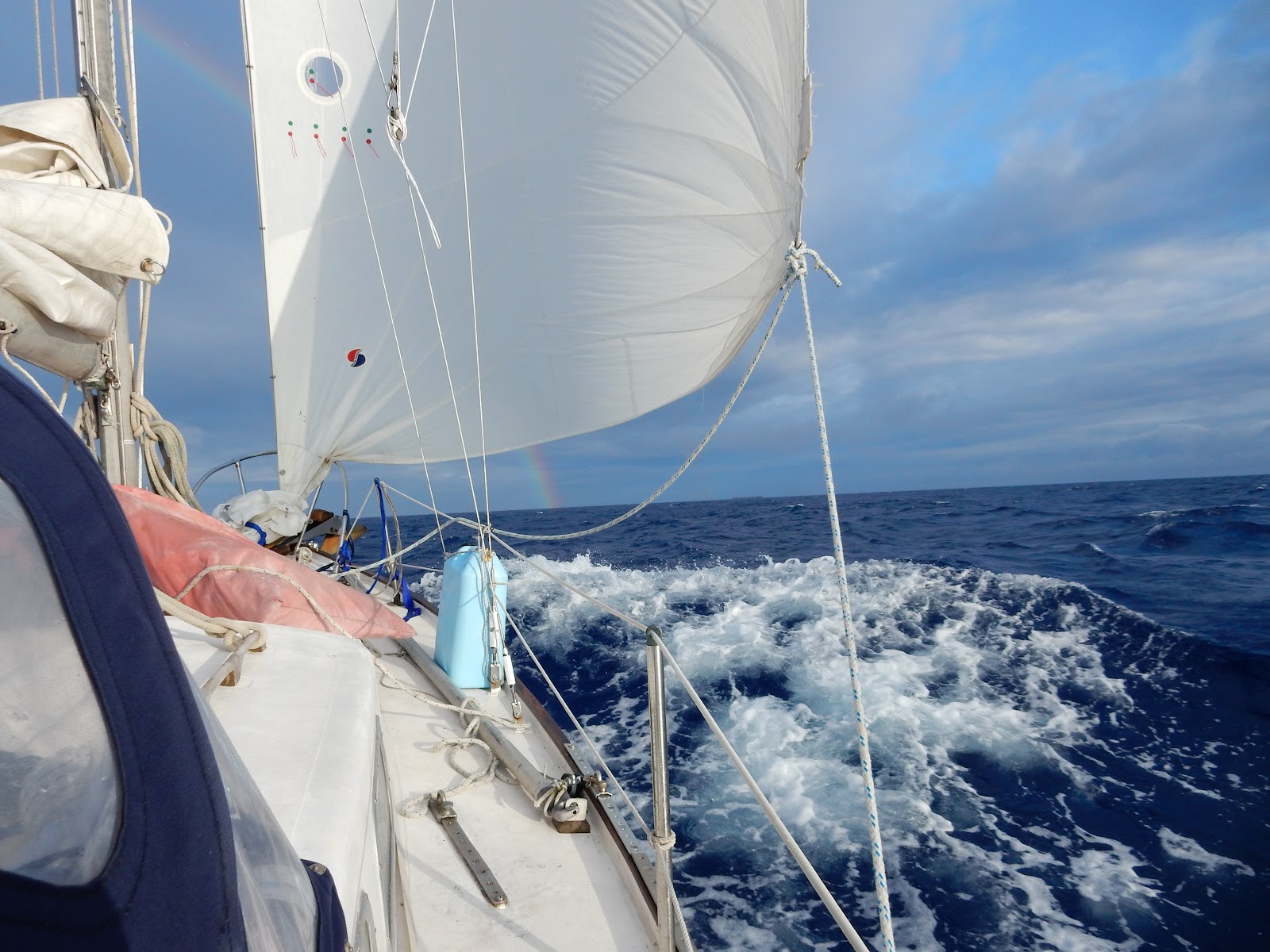 Rainbow at dawn. with a ship off the starboard bow in the distance. We did not see many ships, and often they were going slowly. In retrospect, they  did not want to be in the Florida straits when Arthur was there. At the time this was taken, we were not aware of   Arthur’s actions.

Posted by Laughing Gull at 2:40 PM